HOW IT WORKS:
Six Degrees of Separation is a meme that began with Annabel Smith and Emma Chapman and has been hosted by Kate over at Books Are My Favourite and Best since 2016. Each month a new book is chosen as a starting point and linked to six other books to form a chain. Links can be formed in any way you want, including authors, themes, keywords, and pretty much anything.

Join in by posting your own six degrees chain on your blog and adding the link in the Linky section (or comments) of each month’s post. If you don’t have a blog, you can share your chain in the comments section. You can also check out links to posts on Twitter using the hashtag #6Degrees

The Bass Rock by Evie Wyld is a book I have not read but the treatment of women and their fight to survive is a theme present in the novel. 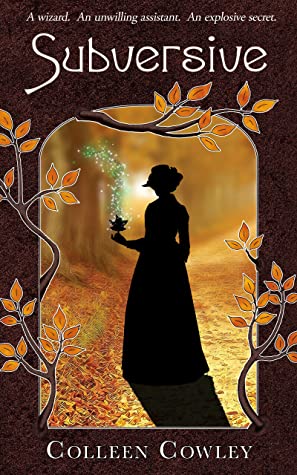 1. The theme is present in one of my favorite trilogies. Subversive by Colleen Cowley is the first book in the Clandestine Magic trilogy. Cowley’s trilogy blends a few genres (historical fiction, romance, fantasy) to create an alternate U.S history where women never acquired rights and only men have magical abilities. While the entire trilogy is amazing, Subversive is my favorite. Beatrix is part of the women’s rights movement and is hired to be an assistant for the town’s new magician. (Review)

2. Similarly in The Midnight Bargain by C.L. Polk, a regency inspired romantic fantasy, women have limited rights. They are restricted from practicing magic but Beatrice Clayborn practices in secret, hoping she will be able to save herself from a marriage collar and having her magic blocked off. Beatrix and Beatrice are both similar in their desires to practice magic in male-dominated societies where they’re told it is impossible for them to do so. (Review)

3. The Downstairs Girl by Stacey Lee is a work of historical fiction set in Atlanta in the early 20th Century about a young Chinese woman Jo who hides her identity writing an advice column under the pseudonym Miss Sweetie. Like Beatrix and Beatrice, her rights are limited for simply being a woman, but also being Chinese means she’s treated doubly worse. Through the column, Miss Sweetie voices her support for race and gender equality and people, especially other women, pay attention.

4. Another young woman is forced to hide her identity in The Impossible Girl by Lydia Kang. Cora Lee is the impossible girl born with two hearts. As a medical anomaly who is sought after, she pretends to be her twin brother Jacob and works as a resurrectionist, illegally exhuming bodies for science or whoever will pay for it, to make a living as well as to stay on top of the rumors of a girl with two hearts and those willing to acquire her body. Kang writes a compelling story and I found myself fully engrossed in the novel, especially the conclusion. It was so good.

5. The theme of hiding one’s identity continues with Sherry Thomas’s My Beautiful Enemy. Alternating between the past and present, ex-lovers Catherine Blade and Captain Leighton Atwood find themselves entangled in each other’s lives in England in 1891 just as they were in 1883 in Chinese Turkestan. Leighton first encountered Catherine as Ying-ying and dressed as a young man. When they unexpectedly meet again in England, an enemy also resurfaces trying to retrieve the Chinese artifact Catherine’s been sent by her uncle to steal. Hidden underneath her ladylike demure is actually a woman skilled in martial arts and isn’t as helpless as she seems as compared to the other women surrounding her and Leighton.

6. While also set in a period where women have limited rights and the expectation is that single women be married, Amelia Smith has the opportunity to do more with her life. Like Catherine Blade, Amelia is more than she seems. In Courtney Milan’s The Devil Comes Courting Amelia Smith is intentionally sought out by Captain Grayson Hunter to help with telegraphic transmissions, except he doesn’t realize that the genius he’s looking for is a woman. When he does, it’s not enough to deter him from trying to employ her.

I’ve been looking forward to this since the beginning of last month. I was more intentional this time around, sticking close to historical fiction and strong female characters pushing against societal constraints in their own ways whether it be practicing magic or working rather getting married.