The trees grew at impossible angles from the limestone escarpment, and brittle rock crunched underfoot. The sound forcefully reminded Goodson Anskar of the day he half ran, half skidded across the broken floor tiles of the monastery’s chapel–the ominous crush and scattering of marble beneath his feet–before he peered down into the Vault of Mount Djall and found it empty.

That emptiness reached inside him now, two years later–two years of research and guesswork, convincing himself his hunch was right. He had arrived in Hedenskia with two thousand knights. Now only he and Brother Marton remained, trudging through the Dead Forest, taking turns carrying the precious child they had never expected to find among the heathens. 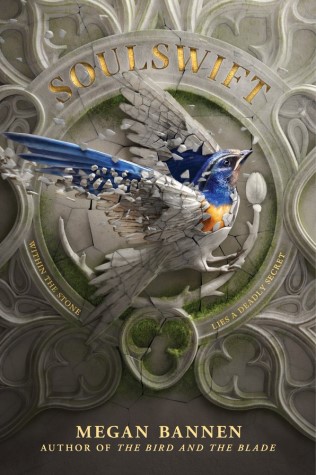 Gelya is a Vessel, a girl who channels the word of the One True God through song. Cloistered with the other Vessels of her faith, she believes—as all Ovinists do—that a saint imprisoned Elath the Great Demon centuries ago, saving humanity from earthly temptation.

When Gelya stumbles into a deadly cover-up by the Ovinists’ military, she reluctantly teams up with Tavik, an enemy soldier, to survive. Tavik believes that Elath is actually a mother goddess who must be set free, but while he succeeds in opening Her prison, he inadvertently turns Gelya into Elath’s unwilling human vessel.

Now the church that raised Gelya considers her a threat. In a race against the clock, she and Tavik must find a way to exorcise Elath’s presence from her body. But will this release stop the countdown to the end of the world, or will it be the cause of the earth’s destruction? And as Tavik and Gelya grow closer, another question lingers between them: What will become of Gelya? (Goodreads)

This one sounds really interesting. Have you read this? Is this on your TBR?

One response to “First Lines Fridays: The trees grew..”